While Productive Cough and the Why Does My Skin Hurt When I Move Pestilence would be a catchy name for an Eastern European boy band, it’s an even catchier description for how I woke up this morning. But I’m too miserable to go on a boy-band tour right now.

I did just go on an emergency-clinic-to-pharmacy tour though. The clinic was only taking walk-ins and I was told I’d have a 35-50 minute wait when I got there but I was called right in and after the nurse took my vitals and left the room, the doctor came in and OH MY GOD HE WAS HANDSOME and he looked in my ears and throat and did other things that I’m sure in some cultures count as pitching woo but WHY DOES HE ALSO HAVE TO HAVE A SHY SMILE AND A SELF-EFFACING DEMEANOR he had on a jet-black wedding ring THAT MADE HIM EVEN SEXIER IF THAT’S EVEN POSSIBLE which I took to mean he piloted jets or something because that makes sense right AND HE WAS WEARING KICK-ASS RED RUNNING SHOES BUT HE KIND OF IGNORED ME WHEN I COMPLIMENTED HIM ON THEM BUT I’M SURE IT WAS BECAUSE HE WAS HUMMING “TRUMPET VOLUNTARY” IN HIS HEAD BECAUSE THAT’S WHAT HE WANTED FOR OUR WEDDING PROCESSIONAL and anyway STOP IT WITH THESE INSANELY HOT DOCTORSCEDAR RAPIDS BECAUSE I’M RUNNING OUT OF CAPITAL LETTERS TO SWOON OVER THEM.

His verdict, unfortunately, was the flu.

You might say I opened the window and influenza.

But you shouldn’t say that. Nobody should say that. Ever.

So anyway, this week brought us Mom’s aggressive UTI and Dad’s COPD exacerbation plus pneumonia plus staph plus MRSA plus five days and counting in the hospital and the only thing our family was missing on our sickening scourge scavenger hunt was the flu so now our punch card is full and we all win a chalupa.

Speaking of chalupas, the pharmacist told me I needed to eat before I took my Tamiflu and it’s almost like we were having a cosmic mind meld because I’d picked up a package of Chips Ahoy! on my way to the pharmacy counter partly because I like using exclamation points in the middle of sentences and partly because pestilent people deserve partially hydrogenated pastries but mostly because I was stocking up on food items to be a responsible Tamiflu taker and WHY ARE YOUR DAMN BLISTER PACKS SO DAMN HARD TO OPEN, TAMIFLU?

So now I’m home eating cookies and drinking Gatorade and listening to Sunday morning 88.3 kcck jazz, which is the balm that cures all ills, but I’m still coughing up hearty chunks of lung and I’m still so feverish that I’m unsteady on my feet and I’m modeling the latest trend in face masks which makes me catnip to the ladies but can you really blame them and MY SKIN HURTS WHEN I MOVE WHY THE HELL DOES MY SKIN HURT WHEN I MOVE? 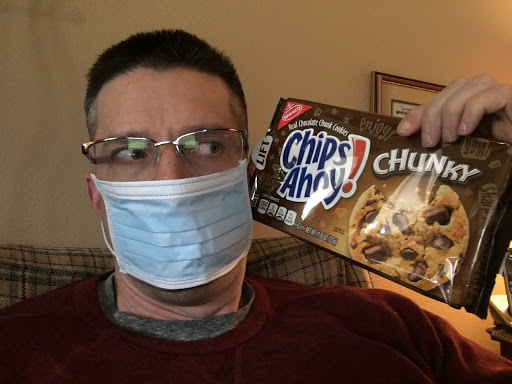