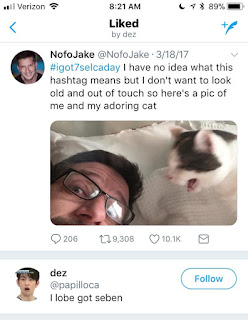 Two years ago when I was a lonely Twitter novice trying to get followers using every devious means I could figure out, I posted anything I could think of under the trending hashtags (a strategy that still has yet to reel in any followers) in an attempt to charm strangers across this flat earth of ours with my weirdness.

To wit: #igot7selcaday. Your guess is as good as mine what the hashtag means, but that doesn’t matter when you’re desperate for Twitter validation. It turns out—and I swear on the Gospel of Sondheim that I am not making any of this up—that selca day is a weekly thing for Korean teens—stay with me here—where they photoshop themselves into pictures of a designated Korean boy band—which in the case of the above hashtag is Got7—and post them online for endless fun and meaningful enjoyment.

Surprisingly, I was not able to figure any of this out from the #igot7selcaday hashtag or from the millions of pictures people were posting under it. Still not wanting to be left out of the party though, I posted a photo of ... me and Bitch Kitty.

Anyway, the key takeaway here is that I’m huge in Korea. And Bitch Kitty is in a boy band. And though this experience garnered me zero Twitter followers, IT STILL GOT OVER 10,000 LIKES. And that’s way more than seben.