I’d finished my classes for the semester and my dad had come to pick me up from college for the holiday break. 1988 had been an emotional roller coaster for our family. We’d lost four family friends in a small plane crash Easter morning, my mom had undergone a radical mastectomy in October and she was just starting her first rounds of chemo before Christmas. I was in the middle of my junior year in college, and I’d finally found a major I was willing to stick with: English. But since I’d waited a full two years to admit to myself I always should have been an English major, I had a lot of catching up to do. And my first-semester courseload had been heavy.

December 21 is the winter solstice—the day of the year with the shortest amount of sunlight—but it was beautiful and sunny in Eastern Iowa that afternoon in 1988. And Dad and I had a nice chat over the 40-minute drive home. My family has always been close, so when we saw Mom standing in the driveway as we pulled up to the house, I figured she was just excited to see me.

I assumed she’d gotten some bad news about her cancer while Dad was gone, so I jumped out of the car before it even came to a stop and I ran up to hug her. But the bad news was something entirely different ... something so random and so unexpected that the shock of the words literally didn't make sense to me: Miriam’s plane had gone down.

Miriam was a friend of mine who had spent the 1988 autumn semester in London studying under the auspices of Syracuse University. I’d just visited her over the Thanksgiving break, and we’d had an awesome time seeing the sights, exploring the museums and taking in all the shows we could afford on our college-student budgets. Among the four we saw were Les Misérables and what ended up being a definitive revival of Stephen Sondheim’s Follies. Sondheim was just starting to appear on our collective radar, and we both agreed that seeing Follies together was a mountaintop experience for us to have shared over our magical week together in London.

But by December 21, I’d come home, a whole month had passed and I’d been so caught up in my finals and holiday preparations that I’d had no idea Miriam was flying back to the States that day—much less what flight she was on. Neither had my mom. But our friend Jody in Ohio did. And when the initial reports that Pan Am flight 103 had disappeared out of the sky over Lockerbie, Scotland, started washing over the newswires, Jody had called everyone she could think of.

Mom and Dad and I raced to the family room and crowded around the TV that crisp, sunny Iowa afternoon to see what we could find out about Miriam’s plane. It was the early days of CNN and 24-hour news, so we were able to get (spotty) information right away about the mysterious crash, along with grainy images of the wreckage shining dimly in the emergency lights that were working so hard to pierce the solstice blackness six time zones away. Dimly seeing what we could of it and haltingly learning more and more about it over the next hours was at once horrifying and comforting, filling us with both hopefulness and helplessness.

In the years since Miriam’s murder, I’ve befriended her parents and friends. I’ve gotten in touch with the roommates she lived with in London, none of whom had been on her plane with her that day. I’ve written pieces about my relatively removed perspective on the bombing that were published in newspapers and scholarly journals and read on NPR. And since I had been in London and had hung out with a lot of the murdered Syracuse students a month before the bombing, I’ve actually been interviewed by the FBI.

And as I’ve grieved and matured over the last twenty-nine years, I’ve discovered that I now tend to be efficiently emotionless when I hear about catastrophic tragedies like the 9/11 attacks and the Newtown massacre and the devastating 2017 hurricanes and the Tacoma Amtrak crash ... though I’ll still burst into tears over emotional pablum like Christmas cookie commercials.

Twenty-nine years ago today, the world learned what a volatile mix misanthropy and religion and blind nationalism can be in a global melting pot.

Twenty-nine years ago today, Miriam and her fellow passengers and their families and friends learned violently and unwillingly about harsh brutalities that the rest of the world got the relative luxury of absorbing over time.

Twenty-nine years ago today, I learned that the distant tragedies that so often happen to “other people” should never be observed as abstractions.

I discovered that news of plane crashes and acts of terrorism that play endlessly in 24-hour news cycles can be both disturbing and strangely comforting. I learned that life is precious, that there are no guarantees, that people who waste your time are robbing you of a precious and very limited commodity, that small gestures can make heroic impressions, that your pain and suffering and anguish and heartbreak both do and don't make you special, that no matter how bad it gets you should work to find solace in the fact that it will probably get better … or at least easier.

Twenty-nine years is enough time for someone to raise a child and send him or her off into the world. Enough time for eight presidential elections and four new Sondheim musicals. (Six, if you count Saturday Night and The Frogs.)

It’s enough time for a gangly, unsure college boy to cycle through four cars and eight houses and eight jobs and three cities as he grows into a successful (more or less), confident (more or less) man.

It’s enough time for him to realize that the world is not fair. That bad things happen to good people. That the bad people who did them don’t always get punished. That horrible tragedy gets easier to accept over time, even though it remains impossible to forget. That the hate that some people burn into your heart never entirely leaves ... and that the smug, satisfied self-righteousness you experience when you finally see images of the bloodied, abused corpse of Moammar Gadhafi—who denied to his last hopefully excruciating, terrified breath every credible report that he'd ordered the Pan Am bombing—feels powerfully good.

I often wonder what Miriam would be if she were alive today. Tony-winning actor? International journalist? Stay-at-home mom? She was among those people you just knew were going somewhere big with their lives. I’m sure that wherever the fates would have taken her, she’d be someone people knew about.

I also wonder if we would still be friends. We’d met that summer when we were singing and dancing in the shows at Darien Lake amusement park just outside Buffalo, New York. Our friendship lasted just seven months until she was murdered. I’m only barely in touch with the other friends I made at the park that summer. Miriam’s family and I aren’t in touch nearly as much as I’d like either (though her mother recently published a book of Miriam's writings along with essays from people who knew and loved her, including me).

Would Miriam and I have drifted apart as well?

Since at this point I’m the only one in control of our story, I choose to believe that by now I’d have sung in her wedding and befriended her kids on Facebook and marched in pink pussy hats with her in Washington and lost countless hours texting ridiculous memes back and forth with her.

Twenty-nine years ago today was the last, devastating act in a year that had shaken—and strengthened—my family to its core. It was the day my worldview changed from naive to guarded, from optimistic to cynical, from insular to secular.

It was the day my friend Miriam was murdered.

And though the world continues to spin forward—as it should—and people’s memories continue to fade—as they do—I will never forget. 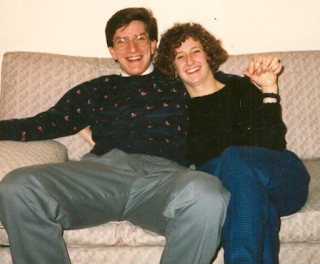