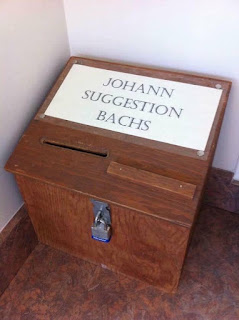 Fun Bach fact 1: Johann Sebastian Bach is considered to be one of the definitive composers of the Baroque Period in music, which lasted from 1600 until Bach's death in 1750. Following the Renaissance Period, which explored independent, interweaving melodic lines in a style known as polyphony, Baroque music introduced the concept of tonality, where music was written in an established key. The highly ornamental and often improvised music of the Baroque followed the key-based chord progressions played by the lower instruments of the basso continuo.

And though all symphonic music from the Baroque Period forward is collectively known as "classical music," the official Classical Period as we define it today directly followed the Baroque, lasting from 1750 to 1825. Its definitive composer was Wolfgang Amadeus Mozart.

I’LL BE BACH WITH ANOTHER FUN FACT SOON!
Posted by Jake at 10:03 AM