I’m at the gym minding my own business

and desperately trying to reclaim even the tiniest shadow of my former (relatively) youthful (relative) pulchritude but there’s a glaring specimen of Unfair Physical Perfection wandering all over the gym as if to ensure that everyone notices his hyper-Adonic contours and perfectly polished cheekbones and covet his genetics and his ... um ... other things. And here I am in my Shakespeare T-shirt that says “This shit writes itself” and he inevitably has a B.A in Bard and a PhD in Pentameter and is mortally offended by my literary flippancy EVEN THOUGH THIS VERY MORNING I MADE A BURNHAM-WOOD-TO-DUNSINANE REFERENCE as we moved a bunch of fake potted trees at our 9 to 5 strike but he seems to have left the gym while I just had my caps lock on and he’s probably going to go pull some kind of manufactured-drama Ophelia stunt to express his disdain and disgust with me but in the mean time since he’s gone some sense of non-outlier self-esteem equilibrium has been restored among the mere mortals and steel plates and cable machines and relentlessly forgettable ‘90s B-side grunge-wannabe noise on the loudspeakers and I’m returning to my regularly scheduled Back And Shoulders Day programming. With 20 more lbs on my shoulder presses! 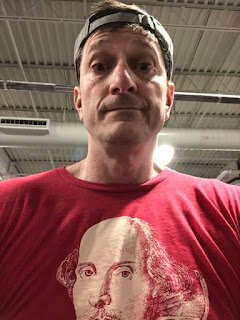 Oh—and not only did Ophelia Guy have the well-honed genetics of a You’re Never Gonna Have This Physique Model but he also had really cool shoes. He’s such a Portia.
Posted by Jake at 3:30 PM