So I guess I’ll finally read it now before the receipt expires and I can’t return it to the bookstore. 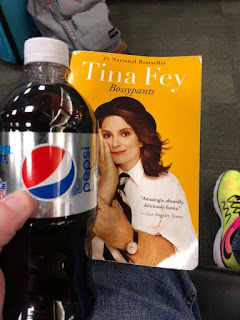 Also: I hate that the only kiosk at CID sells only Pepsi products. And that it’s already out of cinnamon rolls.

Also: The tall, tan blond dude with the alluringly thick thighs who is sitting three seats away from me wearing Tretorns at the airport gate is totally gay and totally objectifying me. I hope.

Also: Last night, after now 14 months of research and meetings and writing and scanning and formatting and copyfitting, I finally got the last of the stray information I was waiting for and finally made my last decisions about the pages I wasn’t sure I had the information and photos to support and I FINALLY released to the printing gods the massive book I’ve been editing and producing to commemorate First Lutheran Church’s 150th anniversary. Plus I finished two epic program-notes essays for Hancher Auditorium in Iowa City. Plus I finished a smallish work initiative a day early since I’m leaving right now on vacation. Plus I know all my lines and music for Elf the Musical. I feel like I’m finally out from under an enormous cloud of endless obligations and I can finally, actually breathe for the first time in forever. Which, totally-not-planned coincidentally, is a song from Frozen. Which is a musical by Disney. WHICH IS WHERE I’M GOING ON VACATION RIGHT NOW.