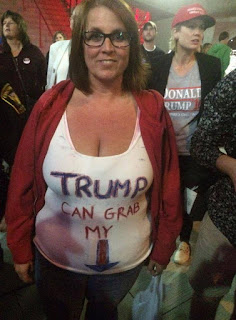 It circulated on social media two years ago toward the end of trump's campaign. I wrote about how disturbing it was at the time--disturbing for its vulgarity, disturbing for its public invitation to apparently consensual rape, disturbing for the Zeitgeist of near-normalized, something-to-be-seen-as-humorous sexual assault that it represented.

It popped up in my Facebook memories this morning ... just as we as a country are being newly assaulted by avalanches of revelations about institutionalized, systemic, cavalierly-dismissed-male-privilege sexual assault wrought by Brett Kavanaugh and his ilk. The coincidence that this Facebook memory appeared now is odd in itself for its almost-years-to-the-date timing, but it's also horrifyingly disturbing for the fact that trump's 2016 pussy-grabbing braggadocio has been buried--albeit under two full years of his almost daily acts of catastrophic, psychopathic incompetence--to the point that we as a society have almost forgotten about it ... or at least become numbly inured to it.

Many of the facts of what I wrote two years ago have changed--I am now among the legions of people who have all but permanently ended relationships with trump-defending friends and trump-apologist newsfeeds, and I cringed as I saw that in this post I'd tempered my outrage over this picture and what it represented by mentioning cat videos and me looking at pictures of men in speedos--but my underlying incredulity, repulse and outrage have only grown in the last year.

Here is what I wrote, without being edited to reframe the snapshot of my mindframe and emotion a year ago. Re-reading it has both shown me how I've evolved in my white-male-privilege-I'm-never-going-to-do-it-and-it's-never-going-to-happen-to-me subconscious attitudes on the issue in the last 12 months and alerted me to the fact that I'm still not done purging those subconscious attitudes:

I subscribe to both liberal and conservative newsfeeds on Facebook and I have thoughtful, principled friends and acquaintances on here from multiple locations across the political continuum. As such, when I scroll through my personal Facebook feed, I see about 3% share-if-you-love-your-sister memes, 4% I-bet-you're-not-smart-enough-to-pass-this-egregiously-stupid-quiz clickholes, 9% adorable cat videos, 17% pictures of hot guys in speedos, and 943% political memes, forwards, rants and breathlessly dire warnings about the future of our very galaxy if X or Y becomes president. Aside from the occasional legitimate news article or mini essay from a thoughtful friend, most of what's on my feed is just noise between adorable cat videos. But it's still noise I pay attention to.

It's no secret that I have a visceral loathing for everything related to Donald Trump, from his willful ignorance to his inability to form a coherent sentence to his national isolationism to the sense of legitimacy he gives to racists, misogynists, homophobes and proud low-information voters. I realize there are deplorables on both sides of the aisle--along with gotcha pictures and footage documenting their collective stupidity--and I'm inured enough that I'm able to ignore the extremes in an attempt to form what I admit is a highly biased but still open-eared personal knowledge base as a citizen and voter.

This picture of a Trump supporter in her hand-lettered shirt has appeared from multiple sources in my feed. At first I just scrolled past it like it was so much extremist noise. But it kept appearing, as more and more sexual-assault accusations piled up against Trump. It kept appearing as Trump dismissed some of his accusers as not hot enough for his tastes. It kept appearing as the idea of consent was thoroughly parsed by everyone from Morning Joe to Rush Limbaugh.

And this picture ... this gleeful woman giving pretty explicit consent for Donald Trump to sexually assault her ... this overweight woman presumably knowing full well that her body is nowhere near Donald Trump's beauty-pageant-level standards of attractiveness ... this judgment-impaired woman who not only found nothing wrong with wearing her message of consent with an arrow pointing to her vagina in public but who happily let herself be photographed in it by someone who obviously let it go viral on the Internet ... this picture thoroughly sickened me.

This woman willingly lowered herself to Donald Trump's lowest form of low. She let herself be mocked and vilified and humiliated on the world stage. And for what? Did she change anyone's vote? Did she elevate the national dialogue? Did she impress her family and friends? Did she advance her cause?