Anyway, none of this stops the looming half marathon from crushing my knees anew, so run I must. Plus if I’m going to run in yellow Mickey Mouse shoes, I need to do some trial runs in the three (yes, three. because I have a shoe-shopping problem. shut up.) pair of yellow running shoes I’ve bought over the years because they were yellow and not because they were good running shoes for my gait and stride.

And these shoes have a splash of pink at the heel, which offers a tantalizing hint-or-not-hint-I’m-not-telling about my questionable sexuality. Hmmm .... 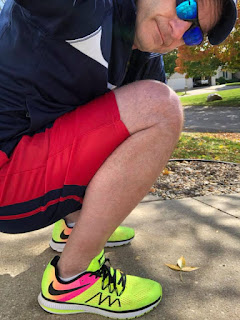 Email ThisBlogThis!Share to TwitterShare to FacebookShare to Pinterest
Labels: Disney, gay, half marathons, injuries, laziness, running, selfies, shoes, Summer Of Running Away From Being 50, training