That’s freaking FAST for me. But it’s probably because it was so damn dark during our entire run that we couldn’t see how fast we were going. #Physics!

Second of all, did I mention it was dark out? Because IT WAS FREAKING DARK.

It was so dark that once we got on the trail where there were no street lights WE AND I AM NOT EXAGGERATING HERE COULD BARELY SEE THE TRAIL. Which, thankfully is so straight (you: How straight is it?) it’s so straight that it actually makes Rob look gay. (you: But doesn’t he love show tunes?) (Rob: Shut up.) 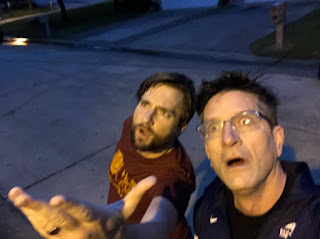 It was also so dark (you: How also was it so dark?) that we had to take our post-run selfie staring into a street light, but not in a dramatic theatrical fashion because we’re dudes (you: Really?) (us: Shut up.).

(you: Did you talk smack about Scott as you ran because he blew you off this morning?) (us: DUH.)
Posted by Jake at 7:30 AM

Email ThisBlogThis!Share to TwitterShare to FacebookShare to Pinterest
Labels: artists, DUH., friends, running, selfies, Summer Of Running Away From Being 50, things in italics, true facts, way too many caps