Today is the anniversary of the 1871 Chicago Fire

... which historians are not opposed to believing actually could have been started by a cow kicking over a lantern in Mrs. O'Leary's barn -- though, to be fair, there are many other credible, though less historically charming, theories as to how the fire started. During the 15 years I lived in Chicago, I saw it as my civic duty to read and learn as much as I could about my city and its history. I was excited to start reading this book when I found it, but it turned out to be more of a lengthy essay on the cultural and sociopolitical Zeitgeist that framed the fire than on the timeline and geography of the unfolding inferno and the human-level experience of surviving it, which I would have found far more meaningful.

In any case, upwards of 300 people died and thousands were left homeless and impoverished 146 years ago today and tomorrow. I mark this day on my calendar every year so I'm reminded to think about who they might have been and the horrors they most certainly endured. And I encourage you to a moment today in their memory to celebrate what you have while you still have it. 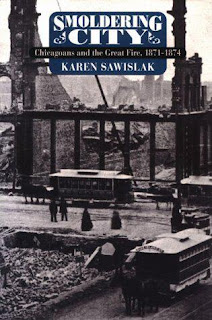 Here's my review from 2012:
I was hoping that Smoldering City: Chicagoans and the Great Fire, 1871–1874 would be a breathless page-turner about the human dramas of conflagrant destruction, abject suffering and triumph over adversity peppered with tantalizing details about old Chicago buildings and neighborhoods that I recognize. Instead it’s a hyperwonkish examination of class inequality, political grandstanding, religious imperialism (particularly the emergence of “scientific” relief that favored distributing blankets and food and financial aid to the religious and the “worthy” newly homeless rich over assisting the chronically poor and the working class who were technically able to support themselves though there was little to no work available in the months after the fire) and the simmering intolerance toward (particularly German) immigrants in the fire’s aftermath. It does draw some timely parallels to America’s current obsession with “big” government in its discussions of Chicago’s post-fire laws against rebuilding with wood (which made rebuilding almost financially impossible for low- and middle-class fire victims) and its curiously detailed recounting of virulently sabbatical opposition to German-immigrant beer gardens serving alcohol on Sundays, which temporarily drove the mostly single-issue People’s Party into power over the status-quo Law and Order party of native-born religious privilege. The book does frequently refer to one concept that will amuse modern Chicago residents, though: the idea that fire victims “fled the city” northward to the neighboring community of Lake View.
Posted by Jake at 2:05 PM