Tech rehearsal for Elf the Musical!

I’ve scored the trifecta of costume plots ... which is an over-fancy way of saying I have only three costumes ... which translates to a minimum of costume changes and a maximum of no-costume-change-panic. 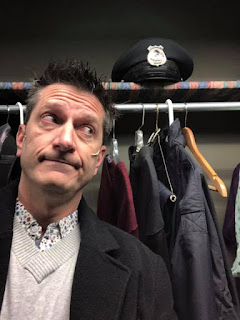 From left to right:1. (on me) Jake the nameless New Yorker in a gray sweater and black coat
2. Jim the festive Greenway Press employee who’s now wearing a festive red sweater
3. Doug the cop WHO SAILS THROUGH THE ENTIRETY OF ACT II WITHOUT A SINGLE COSTUME CHANGE except, of course, for my standard-issue cop tap shoes for the big elf-hatted finale ... which, I suppose also means I have a hat change as well

LET THE TECH-REHEARSAL FUN BEGIN!
Posted by Jake at 12:30 PM