So Disney races are built around being all-Disney-all-or-at-least-a-lot-of-the-time,

and yesterday’s half marathon didn’t disappoint, taking us through three of Walt Disney World’s four parks. Since the parks don’t butt up against each other, there are long stretches of roadways we slogged along, but every half mile or so there was a photo op with a Disney character or a rockin’ DJ or at the very least a screen showing a Disney movie. I’d planned to stop for many photo ops with the Disney characters since I was so unprepared for the race, but the lines were huge and I wasn’t getting tired and it’s REALLY hard to resume a long run after a prolonged stop so I just kept slogging. 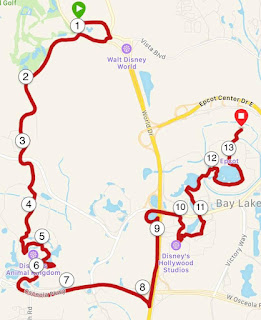 The course took us through what felt like most of Animal Kingdom in the misty pre-dawn, which was just as magical as you could hope ... except Animal Kingdom has narrower walkways than the other parks, so we all had to focus more on dodging and weaving and not slamming into each other than on the abundant Disney magic.

Fun fact: The backstage areas behind the parks that we ran through are almost 100% gray trailers and golf carts and dumpsters with nary a trace of colorful Disney magic among them.

We also ran through a bit of Hollywood Studios, with the usually dour and ominous Tower of Terror bellhops screaming enthusiastically for us in their dour and ominous uniforms. Which was cool.

And our final mile ran from a backstage entrance near England in EPCOT, circled clear around the lagoon past every country—where I yelled “mange tusen takk!” to all the Norwegians cheering us on in their bunads—and then through the front of the park past the early (and cheering!) EPCOT guests and into the finish line by the entrance. It was truly glorious.

My GPS watch was faster than the official mile markers right away, which was just—for the lack of a more relevant term—goofy. And it got faster and faster by the mile, so my watch says I ran .37 miles farther than the standard 13.1: 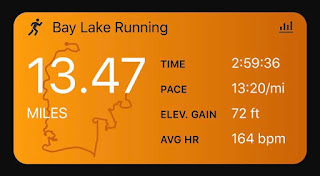 But it gave me a half marathon badge when I synched it to the app on my phone, so there’s that: 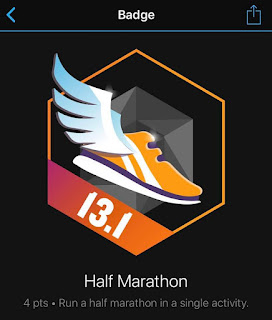 I’m a little miffed that the New York Times covered the dinky New York Marathon instead of my epic Disney victory over my catastrophic lack of training, BUT I HAVE TWO MEDALS AND YOU HAVE ZERO, NEW YORK TIMES, SO THERE.

I also have more chafing in unmentionable places, but let’s not mention that.

Oh—and I got TONS of compliments and conversations from my Summer Of Running Away From Being 50 shirt as people passed me, which is an enthusiastic spin on saying TONS of people passed me. But I passed lots of walkers and drunks and staggering zombies, so I’m still a total rockstar. Right?