Thanksgiving with children in their craft-making phase often involves pipe cleaners and rolls of toilet paper. On the plus side, you always know where you sit: 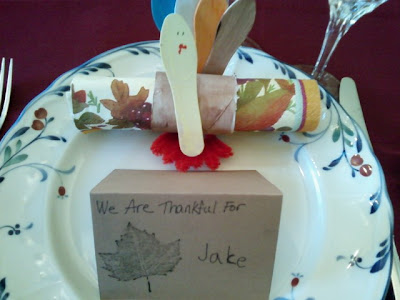 The domestic partner and I are spending the Thanksgiving weekend in Iowa with my folks and my sister's family. And we shared our Thanksgiving feast with some old family friends and their kids and grandchildren, so with 14 people at the table, the toilet paper turkeys proved to be very helpful.

I was all set to tell you the amusing story of how I'd convinced my nephew that one of my mom's way-better-than-your-mom's homemade pies was not her famous banana cream pie but was, in fact, hamster cream pie. But that story got trumped exponentially by my dad between dinner and dessert. We'd cleared the table and agreed that we were way too full to enjoy any pie just yet, so my sister got out some electronic game that you pass around. When the thing comes to you, you have to describe the word it flashes on its little screen and make your teammates guess what the word is before its buzzer goes off. My dad is slowly losing his sight to macular degeneration, so he was struggling to see what the little screen said when it was his turn to play. But--according to his seat neighbors, who were sometimes whispering the words to him when he couldn't read them--he was seeing stuff pretty well. He did have one amusing misunderstanding when he mistook quilt for built and invoked images of Suzanne Somers as he tried to make us guess the word. His seat neighbors looked confused as he described a quilt as a buxom blonde who lived with two roommates, but there was really no harm done. A few rounds later, he looked down at the electronic thingie, triumphantly looked up and said: "the stuff on Mom's banana cream pie." We all shouted out meringue and he passed the electronic thing on to his very flummoxed seat neighbor. After the round was over, the helpful seat neighbor, who happened to be my fabulous domestic partner, felt compelled to announce that he wasn't having any pie. Because the word on the electronic thingie had actually been ... manure.

The pies did have a robust flavor, and they certainly made our tummies grow. And I made a pig of myself when it came time for seconds. I'd also tell you we were pooped by the time we went to bed last night, but I'm way too classy for that. In any case, here's what the pies looked like before Mom's ugly little secret got out: 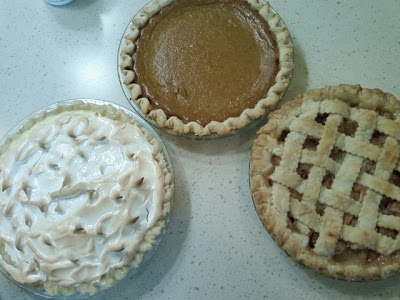 After every bit of pie had been choked down, every dish had been washed and every dinner guest had waddled home, we were sitting around feeling all thankful when we suddenly heard two gunshots. Now, gunfire is not uncommon in the Chicago 'hood where the domestic partner and I live. But it happens only in the summer. Because apparently gang members are delicate little creatures who don't like to conduct turf wars with cold fingers. Or in mittens. But gunfire in Cedar Rapids? I was worried that maybe one of the dead gang members we keep in our trunk had gotten out, but then I remembered: November. Too cold. Plus, we packed only one gang member, so whom would he have to shoot?

The third shot went off as we were cautiously spreading around the house, looking for the source. My sister was in the kitchen at the time, and she realized the shot came from inside her freezer. And I know damn well that her freezer was too packed full of leftovers to accommodate the dead gang member in our trunk. But she opened the door extra-cautiously, just to be safe. And nobody was prepared for the carnage inside: Three cans of pop (we say pop in Iowa) had exploded with the force of Bill O'Reilly's head when talks to someone smarter or gayer than he is. It didn't occur to me to get a picture of the carbonated brains all over the drawers, shelves and freezer bags, but after the CSI team left, I did manage to snap this remarkable shot showing what frozen pop can do to an aluminum can: 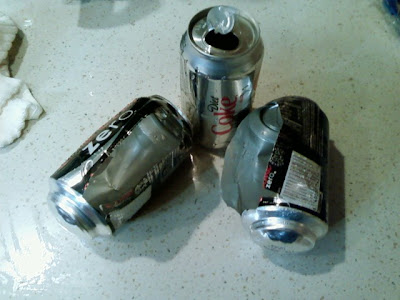 And if manure cream pie and eviscerated Coke Zero carcasses aren't the hallmarks of a happy Thanksgiving, I don't want to be considered an American.
I hope your Thanksgivings were just as memorable. But with less cleanup.
Posted by Jake at 4:38 PM