Mine in Fuddy Meers is the Sisyphean stuff-of-legend Act 1 Scene 7a. (Its wacky-hijinks sequel, Act I Scene 7b, is thankfully so easy for me that it practically memorizes itself.) 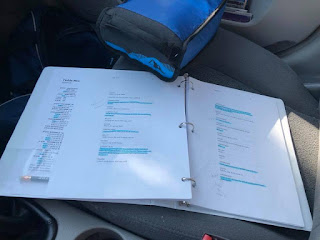 As with every actor, I fully subscribe to the time-honored practice of leaving my script open in the passenger’s seat of my car and then setting it closed on my desk at work, secure in the knowledge that the words through their sheer nearbyness will magically learn themselves into my brain. But Act I Scene 7a REFUSES to comply.

But I will break you, Act I Scene 7a. I’m neither intimidated by nor afraid of your attempts at fearsomeness. I will wear you down and when you’re off your guard and least expecting it, I WILL break you.