As you might recall, I recently bought a Big Boy Car, which came all tricked out with a Big Boy Loan.

Now, conventional wisdom (it would seem) would dictate that I should now curb my frivolous spending and maybe make some other financial sacrifices to accommodate this new pile of debt.

But conventional wisdom is (it would seem) a load of Limbaugh. Just axe President Dubya and his faithful Progress Congress, who take on debt faster than our unprotected port cities take on water in a hurricane.

Inspired by such leadership, I’ve been waving my credit cards around this last month like they were American flags and I was a Republican at a prayer breakfast fund-raiser.

Fortunately, I still have my ability to stick to a budget, and my booty (HA! BOOTY!)—though as pointless as a Pope—falls within the parameters of that dying art known as responsible financial management.

Plus, I took a picture! 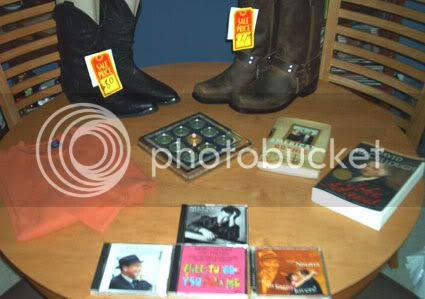 Clockwise, from the top left:
New boots!
ON SALE. The upcoming chorus show is called A Cowboy Christmas. And what do gay singing cowboys wear? You might think it’s concealer with a high SPF, but you’d be only half right. Cowboys also wear fashionable boots, and the cowboy boots I broke in so perfectly by singing and dancing in amusement-park cowboy shows all through college herding cattle on the dusty range seem to have gotten smaller over the years. Or else I’ve developed a bad case of duck feet.

In any case, I received a postcard last week informing me that fabulous Chicago cowboy store Alcala’s Western Wear is having a boot sale through October 10 (up to 50% off!), so this weekend I went in and got me some black pointy-toed boot-scooters that fit like a glove (except they go on my feet). And as I was walking to the checkout, I noticed some brown square toes looking up at me all sad and lonely with their big dead-cow eyes (well, they would have done that if they’d been made with the face part of the cow). And before I could stumble haltingly through a chorus of Friends in Low Places, I found myself stumbling out into the daylight with two new pair of boots in my possession. Yee-ha!

New books!
ONE ON SALE. ONE FULL PRICE. No use boring you with this story again—but if you’re that hard up for entertainment you can read all about it somewhere deep in this long and rambling post.

Used CDs!
ON SALE. I got an inkling a couple weeks ago to buy Billy Joel’s Greatest Hits Volumes 1 & 2 on CD, but I didn’t have an inkling to pay full price. So I headed to my friendly neighborhood used CD emporium, where I found exactly what I was looking for AND two Frank Sinatra collections AND Free to Be You and Me, Marlo Thomas’ 1972 TV cast album of feel-good songs and stories and poems for lonely, anti-social losers who cry a lot kids of all ages who need pre-disco show tunes to help them become good citizens and friends and neighbors … and who aren’t afraid to cry once in a while.

I probably haven’t listened to the album since I was seven or eight, but when I popped the CD into my car stereo last week and all those songs and stories and poems came streaming out of my speakers—even though it had been 30 years since I last sat Indian-style in a circle with my classmates for a listen—I still knew every word. I hadn’t realized it at the time, but the damn thing is a veritable who’s-whom of ’70s celebrities, including Harry Belafonte, Diana Ross, Tom Smothers, Carol Channing, Dick Cavett, Jack Cassidy, Shirley Jones, and singers (!) Rosey Grier (who’s not so good on the pitch thing) and Alan Alda (whose soaring baritone freakin’ ROCKS).

New shirt!
ON SALE. The danger of wandering unfocused into a Gap is that there will be cool shirts on sale and you will be tempted to buy them. Fortunately, I already have at least one of every kind and color of shirt imaginable, so I’m usually able to be strong and resist the urge to splurge. Unfortunately, I don’t have anything in a shade of orange that doesn’t make me look like Trent Lott at a gay wedding. At least I didn’t.

New centerpiece!
FULL PRICE. Friday night I happend to wander by (OK, into) a cheesy suburb chain retail establishment … and I wandered out with a lovely new tealight holder and a big bag of “Asian pear” scented tealight candles.

And now my Big Boy Table (which is all paid for) is complete.
Posted by Jake at 5:18 PM