There is a moment near the end of The Goat, or Who is Sylvia?—Edward Albee's 2002 play exploring the outer limits of love, fidelity, morality and tolerance—where the emotional crisis at the center of the narrative boils over into such catastrophic levels of heartache and rage and such Greek-tragedy levels of destruction and retribution that the first time I saw it—and the second time and the third time and the fourth time—the audience collectively gasped to the point of almost screaming and then sat rigidly and almost palpably silent until well after the final stage light had extinguished and the last emotionally drained actor had silently moved into position for the company bow.

It's one of my two favorite—if there even exists a favorite-not favorite continuum of cataclysmic emotional destruction—moments in modern theater ... the other being the last three seconds of David Mamet's Oleanna before the stage becomes abruptly, dreadfully dark.

Though he's largely a genre unto himself, it's difficult to pigeonhole Edward Albee as a playwright. He wrote or adapted about 30 works that epitomized movements like Theatre of the Absurd and brought popular works of fiction like The Ballad of the Sad Café and Breakfast at Tiffany's to the stage and screen. 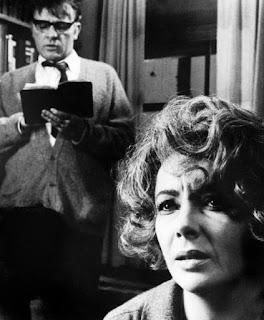 My favorite Albee works—Who's Afraid of Virginia Woolf? (embodied in this photo by the incomparable Richard Burton and Elizabeth Taylor playing the American-experiment patriarch and matriarch George and Martha), The Play About the Baby and The Goat, or Who is Sylvia?—all share the format of four characters on stage and one character who may or may not exist offstage. It's an intriguing conceit, and one that keeps bringing me back to these three plays for my own contemplation. In an odd double standard, though, I can't stand reading them; the characters for me seem to have no depth on the page but they grant a glorious latitude for actors to make fascinating choices as they flesh them out.

I'm a day late in this tribute, but yesterday was the second anniversary of Edward Albee's death. I'm not one to be sad when famous people I've never met pass away—and having seen only six of his works (that I can remember) I'm certainly no slavish Albee devotee—but I'm profoundly thankful for the emotional roller coasters he's put me on over the years ... and for the body of work he's left that I can continue to explore in my own way and on my own time. I have a couple favorite quotes I'd love to mention here, but they're all potential spoilers. So I'll just lift a glass of bergen to his memory.
Posted by Jake at 9:00 PM