Scott and Rob have trained with me all summer—ALL SUMMER!—well, ALMOST!—on their shared journey toward their first—FIRST!—half—HALF!—marathons—THONS!—. The pre-half-marathon packet pickup is like a sacred quinceañera—¡QUINCAEÑERA!—before the race—as is, of course, the selfie—SEL! FIE!—so I tried to coordinate having the three of us pick up our race bibs and T-shirts—SHIRTS! WITH A T!—together this afternoon.

As with all people whose last names are at the beginning of the alphabet and who always got to sit in the front of the classrooms and be at the top of the hair-transplant lists, Scott arrogantly alphabet-privileged his way to the front of the packet-pickup calendar and PICKED UP HIS PACKET LAST NIGHT.

But Rob is my true friend—and therefore contractually worthy of up to two lobes of my liver—and he met me—a mere 15 minutes too late, but I’m sure it was because he was delayed picking out his quinceañera outfit—to pick up our race packets—and more importantly, of course, pose for our life-affirming, existence-validating, handsomeness-celebrating selfie—together at NewBo.

Unfortunately, we are both high-profile local-bordering-on-international celebrities, and we were mobbed—MOB! BED!—by our legion-scale adoring fans all over NewBo, which made it all but impossible to collect our bibs and T-shirts with any shred of furtiveness.

(I totally just said but!)

Fortunately, we easily persuaded two—TWO!—of our slavish fans to stand in for Scott—because it really does take two men to replace him. Plus we couldn’t decide which slavish fan to ask, and we didn’t want to hurt any feelings and make things awkward on this, our joyous quinceañera. 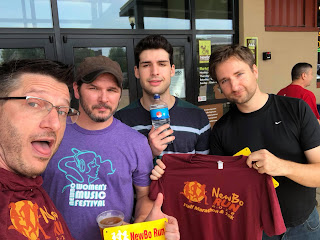 So meet Tim, who ran the after-dark GloRun with me last summer so he’s a legitimate runner and person, and Sage, who is really just three midgets in a trench coat.

Anyway, our bibs and T-shirts are picked—PICKED!—up—NOSES!—and we’ve successfully escaped certain near-fatal mauling at the remorselessly bloody hands of our legion-scale fans and we’ve put in our miles and survived our—meaning MY—stupid injuries and we’ll all be VERY sure to poop—There. I said it. Long-distance running is a cruel laxative, and if we have to suffer it’s only fair that you get to laugh at us.—and the NewBo Half Marathon that we’ve been training for all summer is FINALLY—FINALLY!—here and we’re off and running into history and glory and bragging rights and endless endless endless Facebook posts at 7:30 tomorrow morning.

Email ThisBlogThis!Share to TwitterShare to FacebookShare to Pinterest
Labels: friends, gratuitous diacritical marks, half marathons, How to Turn 50, NewBo, owning my weirdness, running, selfies, Summer Of Running Away From Being 50, way too many caps, way too many exclamation points