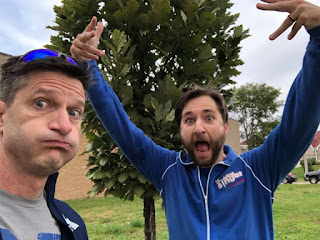 So the trail was *technically* closed this morning, which means we were *probably*, *legally*, *morally*, *common-sensically* not supposed to run on it.

But we were RUNNING! So no dirty rotten coppers could even CATCH US! And we blazed blithely past the ROAD CLOSED sign all cavalier in our law-unabidingness and everything was fine ... until that everything that was moments-ago fine was suddenly covered in mucky, goopy, silty, sticky, and also slippery, splashy, every-other-kind-of-bad-stuff-adjective-that-ends-in-y-y mud. Which we macholy slogged through instead of common-sensoly turning around. Because we ain’t afraid of no mud; we’re MEN. Who just correctly used a SEMICOLON. And we have BAD JUDGMENT. With only ONE E. Because spelling it JUDGEMENT is WRONG AND DUMB AND WRONG SO STOP SPELLING IT THAT WAY, PEOPLE!

Anyway, once we (but not our formerly pretty shoes) survived the Half Mile Of Bad Decisions And Prolonged Regret And There’s No Reason To Turn Back Now Because Our Shoes Are Ruined Anyway, the trail was actually fine. We saw some people walking some totally tummy-rubbable dogs, but encountered no dumbass runners or bikers who were so dumbass that they’d slog through mud when the were clearly told not to. I was technically planning to run 6 miles this morning but was secretly hoping I’d feel up for 7 or 8, but I knew at the 3-mile mark I needed to turn around and head back ... and of course re-traverse all the mucky, goopy, silty, sticky, and also slippery, splashy, every-other-kind-of-bad-stuff-adjective-that-ends-in-y-y mud.

But we did it and my knee hurts only about 1% and I got to hang out with the fucking awesome Rob and not that potty-mouth Scott and even though my awesome-o newish running shoes are caked in mucky, goopy, silty, sticky, and also slippery, splashy, every-other-kind-of-bad-stuff-adjective-that-ends-in-y-y mud, I’m chalking it up as a great morning.

Except my texting thumb is STILL cold and creaky and I swear that’s why I’m writing and posting this three hours after we started running and not because I’ve gotten so slow that I’m mathematically running slower that someone who died in the Middle Ages and is now just dust with maybe a tiny bit of recognizable bone fragments. Because not only would that be a weirdly out of left field, but it would also be somewhere in Medieval England. And that would just be weird.
Posted by Jake at 10:30 AM