Most people—heck, most Chicagoans—don’t realize it, but Chicago was an important player in the development of America’s motion picture industry. And the Chicago studio that was once home to early film legends like Gloria Swanson, G.M. “Bronco Billy” Anderson and Charlie Chaplin—along with screenwriter-turned-Hollywood-gossip-columnist Louella Parsons—still stands in Chicago’s storied Uptown neighborhood: 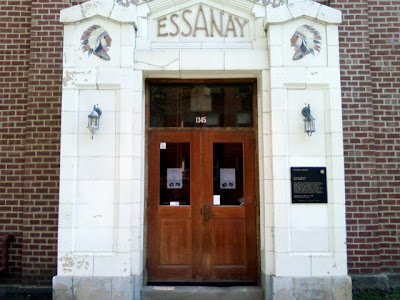 Essanay Studios—founded in 1907 as the Peerless Film Manufacturing Company but eventually renamed Essanay after the initials (S and A) of its founders, George K. Spoor and Gilbert M. Anderson—turned out about 2,000 shorts and features between 1907 and 1917.

Its first film, An Awful Skate, or The Hobo on Rollers, was produced in and around its first studio location at 946 Wells Street (now 1300 N. Wells after Chicago changed its street numbering system in 1908). It starred Ben Turpin, who was then the studio janitor, and it cost just a couple hundred dollars to make. But it grossed perhaps as much as $10,000—close to $216,000 in modern dollars—when it was released. Suddenly flush with money and success, Essanay Studios moved to its giant new location—and into its golden age—at 1333-45 W. Argyle St. in 1908.

Chaplin actually lived in Chicago for less than a month and filmed only one notable movie here: His New Job. But his is the most famous name associated with the studio, and it lives on in the Charlie Chaplin Auditorium of St. Augustine College, which occupies the site today.

Esssanay Studios dissolved in 1918, but the building still stands on a leafy residential street. It was designated a Chicago Landmark with this plaque on March 26, 1996: 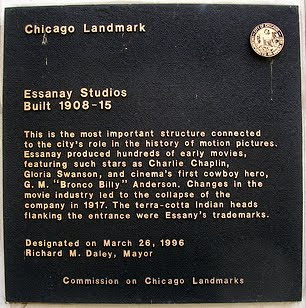