Pride weekend in Chicago was one of the best I can ever remember. And not just because the weather was perfect. And our bathroom renovation was finally done. And I finished the Proud to Run 10K in 55:21—an 8:55 pace, which is well within the parameters (though still on the slower end) of my personal acceptable-pace continuum. And for the first time in nine years of Chicago pride festivities I didn’t even have a glimmer of a panic attack, which is how my lifelong social anxiety disorder and I have traditionally chosen to respond—often by hiding in the house—to the horrifying prospect of large crowds of happy, friendly people who want to talk to me. Social anxiety disorders are retarded, and I’m pretty proud to report how far I’ve come in beating down my own personal retard in the nine years I’ve lived here. (That metaphor probably came out a bit harsh, but words cannot describe the anger and frustration I feel over all the living I’ve lost while hiding in my house as the world partied on happily outside without me.)

Wow. I didn’t mean to go there in this post. But I did and I’m not taking it back. Because my pride weekend this year had an extra level of pridyness that I've never enjoyed before. And it felt great!

PLUS! I took pictures!

We started pride weekend at a rooftop party at Boytstown's fabulous Center on Halsted. We didn't know many people there so I didn't take many pictures because taking pictures of complete strangers is kinda creepy. But I did snap this view of the Chicago skyline rising above some of the heads of some of the aforementioned strangers. For those of you who are new here, this picture contains Chicago's four tallest buildings in order of height (though since they're not built right next to each other, the height hierarchy isn't readily apparent): the John Hancock Center (#4) is the black building peeking out behind the brick-y buildings on the left, the oft-forgotten Aon Center (#3) is the flat-topped white building with the vertical black stripes three buildings to its right, the so-new-it's-not-totally-finished-yet Trump International Hotel and Tower (#2) is the silver thing gleaming in the center of the photo, and the soon-to-be-called Willis Tower (née Sears Tower, #1) is the noble black structure climbing skyward on the right: 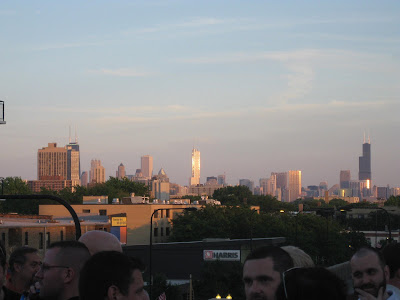 We left the Center on Halsted to head to a couples' party at the lovely home of some boys from our book club. But I don't know any of the guests well enough (yet!) to post their pictures on my blog. So you'll just have to use your imaginations to picture us all laughing mirthfully over some wry anecdote I've told about my New Yorker subscription as we stand around swirling authentic Champagne and chomping hand-rolled canapés in our velvet smoking jackets. You can't tell in this picture but under my velvet smoking jacket I'm wearing my new basketball shirt. Seriously. It has a picture of a football with the word "baseball" under it. Get it? It's funny because I don't speak sports! 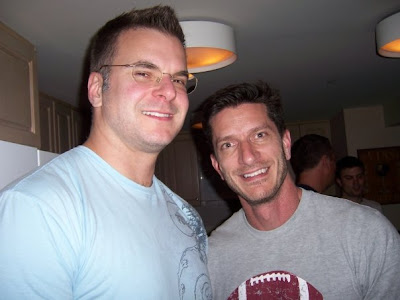 Unfortunately, we couldn't stay at the party long because we had to be up early for Proud to Run, the big gay 5K or 10K (you choose!) that always kicks off pride weekend in the sweatiest, shirtlessiest of ways. I wasn't functioning well enough to use my own camera so early in the morning, but our friend Shaine was at the finish line, and he provided the only photographic evidence of my participation in the event: 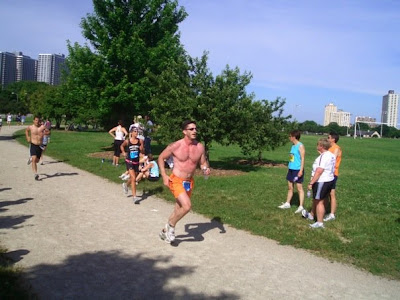 Since we live mere Ks from the the finish line, we always invite all the sweaty runners we know over to our house after the race for Proud to Brunch, a festival of delicious pastries, warm egg casseroles, dehydrating beverages and ridiculously hot friends: 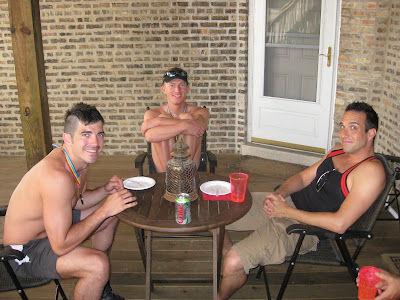 Some of these ridiculously hot friends were race winners. And they shamelessly rubbed our faces in their bemedaled superiority: 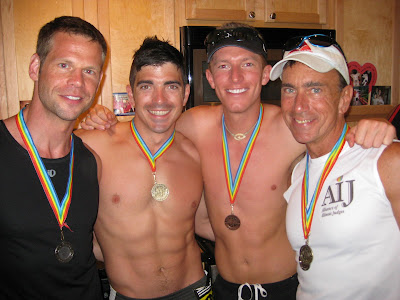 Or they just stood around our house being hot: 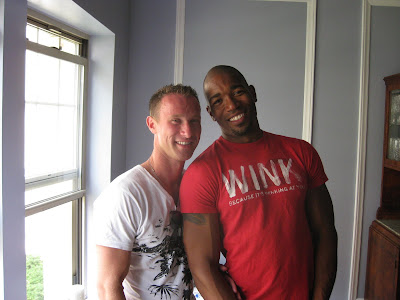 Sometimes I sneaked my way in the pictures to show off my tattoo, which still has the power to shock me with its way-bigger-than-I-thought-it-would-be-ness: 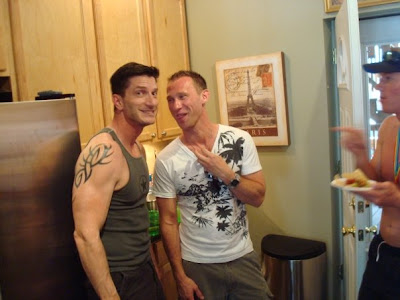 And sometimes, like some Lawrence Welk sister act, I posed with other tattooed friends to show off our "ink," as the cool kids in prison call it: 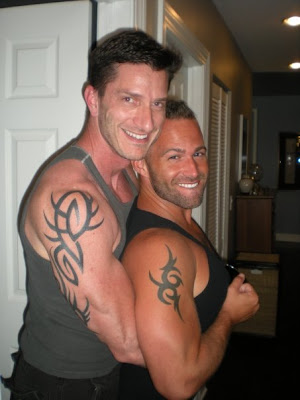 And just to prove that we count a few women among our hot runner friends, here is a gratuitous Proud to Brunch chick shot: 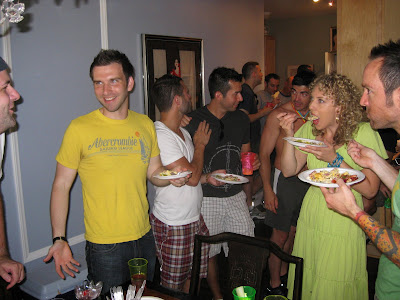 We spent the rest of the day hanging with other friends at Pridefest, the street fair that takes over Boystown for the two days leading up to the parade. It was actually my favorite part of the whole weekend; we ran into everyone we knew, we ate food out of paper wrappers, we drank fruity drinks (some with alcohol!) and we spent almost the entire afternoon and evening with another couple we'd previously only kind-of known as bar friends. We ran into them the moment we got to the street fair and we really enjoyed laughing and eating and drinking and gossiping our way through the rest of the day together. Except we all stood too close to the speakers for the perhaps-named-after-a-misspelled-Cole-Porter-song Inaya Day concert. And 48 hours later I'm still having trouble hearing out of one ear. Uff da.

The next day was the pride parade, which the domestic partner and I marched in ... in one of the ass-last parade entries. We were so ass-last, in fact, that we met up with our fellow marchers before the parade at Fullerton Avenue, a whole freaking mile south of the parade's official Belmont Avenue starting point. But, in a fit of possibly unintentional homosexuality, we had our pre-parade doughnut party in Oz Park, which was built in honor of Wizard of Oz creator and Chicago native son L. Frank Baum. And you know what a Wizard of Oz-themed park means, don't you? DOROTHY STATUE! 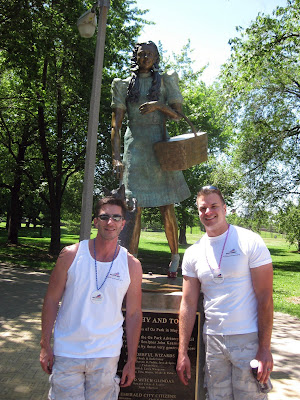